Vertical Datum
A vertical datum is used for measuring the elevations of points on the Earth's surface.

In South Africa, we use a "2D + 1D" system, where there is a separate datum for horizontal and vertical co-ordinates.  The vertical datum is sometimes referred to the Land Leveling Datum and is based upon the measurement of mean sea level (MSL) at tide gauges at Cape Town, Port Elizabeth, East London and Durban at the beginning of the 1900's.

The published heights of all benchmarks, town survey marks and trigonometrical beacons are given as heights above LLD. This datum is close to, but not exactly the same as the geoid.

Geoid Height (N) is the height of the Geoid above ellipsoid 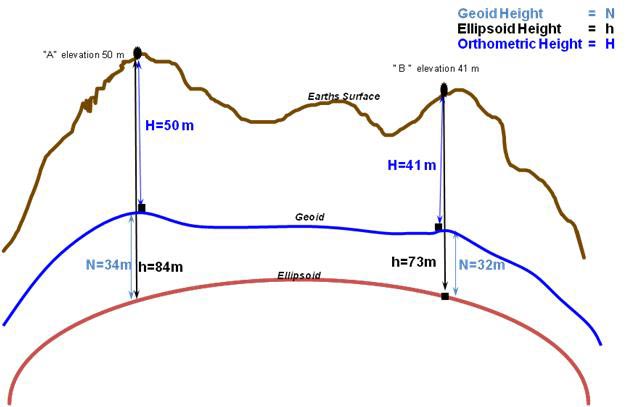 The ellipsoid is a mathematical surface obtained by rotating an ellipse about its semi-minor axis. The dimension and orientation of the ellipse are chosen to "best fit" the ellipsoid to the geoid over a given area, or over the whole Earth.

NGI is pleased to announce that a geoid model for South Africa is now available for public trials and testing, prior to its official release. Initial estimates are that the geoid is accurate to about 7 cm and will be published relative to the current ITRF2005 coordinates of TrigNet and in the same format and resolution as the global Earth Gravity Model 2008 (EGM2008).

Besides being used by surveyors and geodesists as a reference surface for positioning, oceanographers use the geoid, or rather remove the geoid, from sea surface observations to understand ocean currents and the effects of sea bed topography on these currents. Geophysicists and geologists use the geoid to locate possible high density ore deposits and other abnormalities in the lithosphere. On a global scale, the shape of the geoid may vary with time as a result of the melting of glaciers and polar ice caps and uplift or subsidence of land masses as a result of tectonic action.

The availability of the South African geoid model, described in detail in the article by Prof. Charles Merry and Garth Chandler (SaGeoid10.pdf), has marked an important milestone in the development of the geodetic infrastructure of South Africa which, in conjunction with the well established network of permanent GNSS base stations, TrigNet, has placed South Africa firmly at the forefront of geodetic science and its applications in Africa. Apart from the over 50 000 well known trigonometrical beacons, town survey marks and bench marks, South African surveyors, engineers and geo-scientists now have the benefit of real time positioning services throughout the country and a high accuracy geoid model for height determination to give centimetre accuracy, three dimensional positioning, 24 hours a day.