History of Geodetic Surveying in SA

History of Geodetic Surveying in SA

The first person to make a significant contribution to geodesy in South Africa was the French scientist and mathematician Abbe De La Caille. He was sent to the Cape to catalogue the southern stars by celestial coordinates over the period 1751-53.

LaCaille was born in 1713 at Rumigny in France. His early training lay in the humanities and 1736 completed his studies in theology and although he was referred to as L’Abbe de LaCaille he was never ordained. LaCaille became interested in mathematics, astronomy and geodesy which he taught himself and in 1739 was appointed to the Chair of Mathematics at College Mazarin des Quatre-Nations in Paris. A small astronomical observatory was built at the College which spurred on his desire to learn more about the science at which he developed into a most proficient observer, to the extent that he was later employed by one of the famous Cassini’s on the measurement of a French arc of meridian. At this time there was also an urgent need to create catalogues of stars to be used for navigation purposes, a task at which LaCaille had spent a great deal of time while in Paris. With this background, LaCaille persuaded the French Academy of Science support a project in which he would catalogue the Southern hemisphere stars and, with the permission of the Dutch East India Company, sailed for the Cape Colony in 1750.

After being diverted to Rio de Janiero for repairs to the ship, LaCaille landed at the Cape of Good Hope on 20 April 1751 – 250 years ago – with the intention of ;

No mention was made in these intentions to measure an arc of meridian at the Cape. 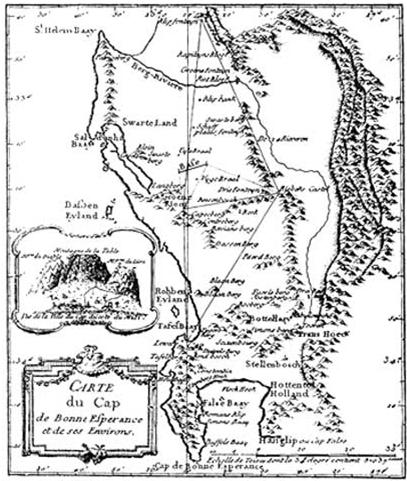 Immediately on his arrival at the Cape, LaCaille set up a small astronomical observatory at the house of a Mr. Bestbier, a cavalry captain, in No. 7 Strand Street. The observatory was about 4m X 4m and was described as “at the bottom of the court of the house where I stayed, on a raised area of 7 or 8 feet (2.1 or 2.5m) above the level of the sea”. Within a year of his arrival, LaCaille had catalogued nearly 10000 stars and had completed the tasks which he had set out to do. At the time there was much controversy as to whether the earth was flattened at the poles or at the equator and in fact whether the shape was the same is the Southern hemisphere as it was in the Northern. After completing his main astronomical tasks, LaCaille was ordered to remain on at the Cape for a little longer. Not wanting to lie around idle, LaCaille began looking for a suitable piece of ground on which to measure a base line to commence triangulation measurements to be used to measure an arc of meridian to determine the size and shape of the earth in the Southern hemisphere.

In September 1751,  LaCaille wrote that he had found a suitable site on which to measure a base line to serve as the start of the triangulation to measure his arc of meridian. The selected site was near Groenkloof about 12 leagues (± 58 Km) north of Cape Town. It was, however, only the following year that the approximately 38803 Paris feet (± 12.6 Km) base line was measured twice by placing 4 carefully calibrated rods, each of about 5.8m in length, end to end in leap frog fashion. From the ends of the base line two further points were triangulated – one at Kapokberg and another at Riebeek’s Kasteel and from these two, the terminals of his meridian arc were triangulated. The Southern terminal was naturally his observatory in Strand Street and the Northern terminal on the farm Klipfontein near the present day Aurora. When the calculations were completed, LaCaille found that the value of one degree of latitude at the Cape was equivalent to a one degree at about 45 degrees in the northern latitudes which was inconsistent with the thinking at the time. He found that his measurement of a degree of latitude in the Southern Hemisphere subtended a greater distance to that in the Northern Hemisphere. In other words, he found that the earth was the shape of a pear, with a larger bulge in the southern hemisphere.

The discrepancy remained a mystery for nearly 70 years and it was only when Sir George Everest (pronounced ‘Eve-rest’ and after whom Mount Everest was named) visited the Cape in the latter part of 1820 to recuperate from fever which he had contracted while surveying in India that some explanation was offered. Everest had some experience of the effect that large mountain masses have on astronomical measurements and, although very little is known of the work that he did during the year while at the Cape, he seemed to have relocated all of LaCaille’s points as best he could. It would appear from a report written in August 1821, that Everest did not carry out any astronomical observations at the terminal points while at the Cape but concluded, presumably by inspection, that the combined effect of the mountain masses at both Cape Town and at Aurora could have affected the result of LaCaille’s latitude measurements by as much as about 9 seconds of arc. In his report to the first Astronomer Royal of the Cape, the Rev. Fearon Fallows, Everest suggested that LaCaille’s meridian arc should be re-measured and at the same time extended further north as a means of verifying the work of LaCaille.

Fallows’ successor was Sir Thomas Maclear who arrived at the Cape in 1834. Apart from his astronomical duties, Maclear was tasked with finding an appropriate site for a baseline and to carry out related geodetic work to verify the work of LaCaille as suggested by Everest. Maclear set about his verification by locating, as Everest had done, LaCaille’s terminal points. He found the site of LaCaille’s Strand Street observatory with reasonable success but the search for LaCaille’s northern terminal on the farm Klipfontein near Aurora was less successful as no evidence could be found to indicate the position of LaCaille’s point with absolute certainty. In spite of this, Maclear went ahead and measured a baseline from which he triangulated to the Royal Observatory and a point close to where it was thought that LaCaille had set up his observatory at Klipfontein. The Strand Street observatory was also connected to the Royal Observatory by triangulation. The meridian arc which Maclear was able to calculate with these measurements proved the correctness of LaCaille’s work after taking into account the attraction of the mountain masses at the two terminals as suggested by Everest. Maclear’s measurement also highlighted the outstanding capabilities of LaCaille who was consequently considered to be one of the greatest geodesists of the time.

Having completed the verification of LaCaille’s meridian arc, Maclear went on to extend his triangulation northwards to a point near Kamieskroon in Namaqualand and eastwards towards Cape Agulhas. The points which Maclear surveyed in these extensions would eventually become the foundation of all subsequent geodetic operations and survey work in South Africa leading one to suggest that Maclear can be considered to be the father of the highly respected survey system which we have in this country.

What is to be seen of the work of these three astronomers and geodesists? The observatory in the home of Mr. Bestbier in Strand Street no longer exists and, as we have seen, the northern terminal of his meridian arc at Klipfontein was not found by either Everest or Maclear. The Western and Eastern terminals  of the baseline set out by Maclear are clearly marked as tall cairns on the plains near Darling and were declared as National monuments in 1980 and 1991respectively. The northern terminal of Maclear’s arc of meridian at Klipfontein was found in 1990 and was declared a National monument in 1994. A replica of the stone that marked the point was made and built into a cairn at this site just outside Aurora. The original stone is on display in the museum of the Chief Directorate National Geospatial Information in Mowbray. Perhaps the most prominent evidence of the work started by these three gentlemen is, however, the nearly 29000 trigonometrical beacons with their white pillars and black vanes which can be clearly seen on the tops of mountains and high buildings throughout the country and even in neighbouring countries and represents the pioneering work started over 250 years ago.