The definition of rectification: - Removing geometric distortion from a raster or a vector object. Rectification is usually achieved by aligning raster features or vector coordinate positions with features on a base map or other coordinate reference framework.

A shift in the location of an object that changes the perspective characteristics of the photo.

There are four types of distortion that cause changes in the apparent location of objects in photos.

This distortion is due to the height of the terrain. The higher the terrain is, the closer it is to the aircraft. Objects appear larger than those on terrain at a lower elevation. For example, a soccer field on top of Table Mountain would appear larger than the same size soccer field down at sea level, if the height of the aircraft above sea level is the same when both pictures are taken. This is because the ground on top of Table Mountain is closer to the aircraft than the ground down at sea level.

When these soccer fields are represented on a map they must be the same size and shape, therefore the scale distortion must be removed.

All photos have tilt displacement 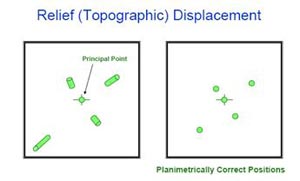 The Process of rectification

The process of rectifying and placing images in their correct map position is explained using the sketch below. An aerial photograph taken of an image such as a building A in the below sketch is “displaced” to position ‘A’ due to a combination of the height of the building above the datum and radial distortion from the centrally projected camera/projector lens. 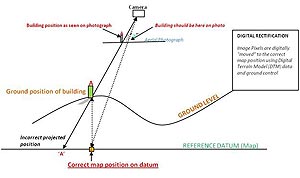 The modern digital process of rectification requires a Digital Terrain Model (DTM). A DTM is a network grid of digitally spaced heights at specific coordinate intervals on a datum representing the ground levels.

Use of specific images coordinated on the ground (Ground Control) is combined with a DTM to control the digital framework.

The end product of moving or placing the images in their true map positions is called an “Orthophoto”.

Rectification can thus be described as the removal of distortions and displacements, inherent in photographs, in order to produce a true to scale map or orthophoto, on a selected datum.